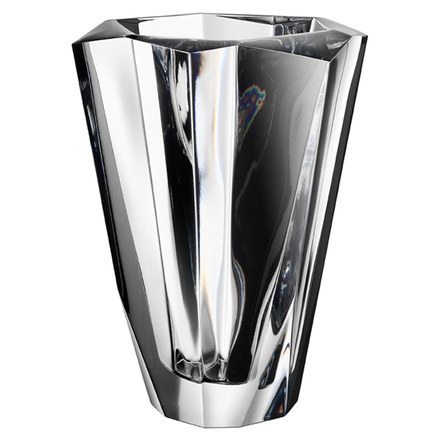 Like the most precious of treasures, designer Malin Lindahl's new jewels - a vase, a bowl and a platter - adorn the contemporary home. The shimmering facets and asymmetrical design give the hand-cut, glistening Orrefors crystal an innovative, inspiring look.

History of Orrefors:
​The road to Orrefors winds through deep forests of spruce that open suddenly on darkly glistening lakes, and meadows and farmhouses set behind stonewalls. Here are the elements that gave rise to glassblowing, and which are reflected today in the finished glass; the ripples across the water, the sunbeams that penetrate the tall, dense stands of spruce, and the crystal-clear air. It is hardly surprising that the glass created here is beloved all over the world. The Swedish glass industry was born about 250 years ago, not far from Orrefors - only about 20 kilometers as the crow flies. In the summer of 1742 the first glassworks, warehouse, potash furnace and smithy were inaugurated in which is now the small village of Kosta.