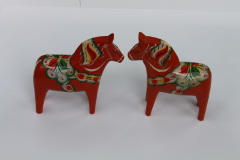 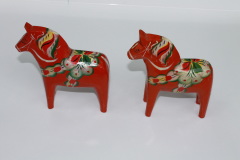 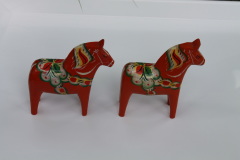 ”Dalahäst” - A Dalecarlian horse or Dala horse (Swedish: Dalahäst)[p] is a traditional carved, painted wooden horse statuette originating in Swedish province Dalarna. In the old days the Dala horse was mostly used as a toy for children; in modern times it has become a symbol of Dalarna, as well as Sweden in general. Several different types of Dala horses are made, with distinguishing features common to the locality of the site where they are produced. One particular style has, however, become much more common and widespread than others. It is stoutly carved and painted bright red with details and a harness in white, green, yellow and blue.

It was in the small log cabins deep in the forests during the long winter nights in front of a log fire that the forerunner of the Dala horse was born. Using simple tools, generally only a knife, woodcarvers made toys for their children. It was only natural that many of these toys were horses, because the horse was invaluable in those days, as a trusty friend and worker who could pull great loads of timber from the forests during the winter months, and in the summer could be of just as much use on the farm.

The art of carving and painting the small horses quickly flourished in the 19th century, as economic hardship in the region inspired greater production of the small horses, and they became an important item of barter. Horse-making may have started as something to do during the long dark winter months, but soon the Dala horses were traded in exchange for household goods and their carving and painting blossomed into a full-fledged cottage industry. The rural families depended on horse production to help keep food on the table, as the skills of horse carving and painting were passed on from generation to generation.