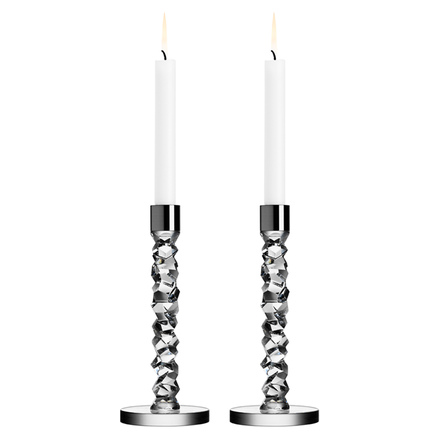 In recent years, Lena Bergström has drawn inspiration from jewels and gemstones. The Carat collection is no exception. Lena uses new techniques to give us the genuine feel of cut diamonds. The distinctive cut pattern design invokes a wonderful feeling as you gaze upon these beautifully cut crystal gemstones.

The History of Orrefors:
The road to Orrefors winds through deep forests of spruce that open suddenly on darkly glistening lakes, and meadows and farmhouses set behind stonewalls. Here are the elements that gave rise to glassblowing, and which are reflected today in the finished glass; the ripples across the water, the sunbeams that penetrate the tall, dense stands of spruce, and the crystal-clear air. It is hardly surprising that the glass created here is beloved all over the world. The Swedish glass industry was born about 250 years ago, not far from Orrefors - only about 20 kilometers as the crow flies. In the summer of 1742 the first glassworks, warehouse, potash furnace and smithy were inaugurated in which is now the small village of Kosta.

And if you have once traveled this road, through dark spruce forests, across the open meadows, past the stone walls, past the shining lakes and the sparking brooks, you too will understand what makes it all possible. This where the world's most beautiful glass is created.
​